Dare to be Different… (for girls only)

It is becoming clearer day-by-day that the world we live in today is one that is morally sick.

Moral values seem to be lost among the youth in this generation because of so much misconception about sex, relationships, etc; 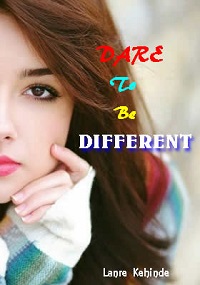 More disgusting is the fact that the situation is almost as bad in the outside world as it is in the church of God. Our culture has made the situation this bad because it has made the topic(s) a no go area for discussion with both our parents & pastors thereby making most people to grow up with the wrong orientation on the issues of sex, relationships etc.

Who is in the best position to know how to operate a machine effectively? Is it the user of the machine or the manufacturer? Obviously, it’s the manufacturer because he’ll have a broader view about the functionalities of the machine than the user who will definitely have a limited view. Do you know that it’s not romantic films or novels that brought about relationships in the first place? It was GOD that looked at Adam in the very beginning and decided that it’s not okay for him be alone and he saw the need for a ‘babe’ in his life (Adam did not even see the need himself) before HE decided to form Eve out of him. Do you now agree with me that it’ll be the highest level of stupidity to allow stuffs like romantic films, M & B novels to teach us about what a relationship should be like? This is so because the people who wrote those stuffs are ignorant people themselves on the issues of relationships because they’re not the manufacturer but users who have abused what was the real purpose the manufacturer had in mind before HE initiated it in the first place. This is why the most authentic manual for any relationship between members of opposite sex is the manufacturer’s manual i.e. the bible.

Looking at it more practically, the reason why many people misbehave in relationships is because they think the only thing wrong with sex before marriage is just because God said it’s a sin. By the time you’re through with this write-up, you’ll discover in addition to God saying it’s wrong, it’ll be absurd for you as a lady not to see anything wrong with pre-marital sex even if guys choose not to see anything wrong with it because the guys don’t seem to have much to lose practically after the sex. The truth is most guys that womanize do so because they believe ladies are generally gullible and cheap. It’s so bad now that it’s common knowledge among many guys that many of the so-called born again ladies are the cheapest ladies to have sex with all in the name of relationship and preparing for marriage. You can start in your own little way of changing this negative reputation about ladies by personally deciding on your own to become more responsible. This is the only way you can become different in a perverse and morally sick world.

Create value for yourself. The main reason why many ladies have come to see sex before marriage as normal is because they don’t place any value on themselves. Know this, no guy will treat or value you above the value you place on yourself. The value Tim Hortons place on common donut is $1, as small as it costs, no matter whom you are, you must pay before you taste it. How come a whole human being (lady) who God fearfully and wonderfully made must now be tasted (kissing/smooching) before proper payment (marriage)? Is it not sad to know that the value many ladies place on themselves is less than the value eateries like Tim Hortons place on donuts? We all know that anything that’s unused has a much greater value than one that has been used even if it was used only once. This same principle applies to your sexuality. This explains why a man will naturally have more respect for a virgin wife on the wedding day than one that has been disvirgined before then. One thing I know is that it’s impossible for a guy to sleep with a lady before marriage and still respect her at the same time because sex before marriage reduces the value of the lady before the guy (most guys won’t tell you this)

I don’t think there’s any lady that will not get offended if you refer to her as a whore but the hard truth is that if you sleep with a guy before marriage you are too cheap as a lady and the bitter truth is that there’s not much difference from being a whore because one thing is common to the whore and the ‘decent lady’ sleeping with her boyfriend, no sense of value/self worth. Nobody is saying you should be unnecessarily pompous/proud neither is anyone saying that relationship with guys is bad since it’s God who brought the idea of relationships in the first place but at least keep a respectable relationship where you’ll be valued & respected. The least you can do for yourself in order to become a more responsible lady in this generation is to create value for yourself.

Change your mind set towards sex before marriage. The mindset should be such that the same disgust you have just thinking about eating faeces with your mouth is the same hatred/disgust you’re supposed to have towards sex before marriage. Reading and meditating on the scriptures daily will also help you on this point because it will help to renew your mind on a continual basis just like the bible says until you have the correct/right mindset on the issue.

Don’t read books/watch films that can aggravate your appetite for sex. They will only give you a very false impression that sex before marriage is very normal with no serious negative consequences just like novels e.g. Mills & Boons make us to believe with their ever constant lies… “and they lived happily thereafter”

Don’t create/stay in an environment that can easily permit kissing, smooching, sex etc.

e.g. dark corners. If you’re in a real relationship where you have to discuss seriously, you can opt for an open place like an eatery where you can still have enough privacy to discuss even in the presence of others (being alone and not alone).

Decent dressing; it’s the way you dress you’ll be seen and addressed. Let private parts remain what they are i.e. private (for your eyes only and not for public consumption). Excessively tight dresses should also be avoided. The best you can achieve with such dresses is to make guys lust after your body not really you & as such they will be willing to do anything to be in relationship with you all in a bid to eventually touch/sleep with you and then look down on you & most probably run away thereafter. You can never get true love through that approach. Is that what you want for yourself?

Flee fornication; the word that is always constant in the bible whenever it’s talking about fornication, lust etc. Is flee. That is the best way to avoid fornication, FLEE

Fear God; This is the most important of all. The direct implication of the statement in the scriptures “the fear of God is the beginning of wisdom” is that as far as God is concerned, anyone that doesn’t fear God is not better than an idiot. What then is the fear of God? It is “carrying the consciousness of the presence of God wherever we go and in whatever we do”. Let’s think a little, if it’s possible for our biological father to follow us everywhere particularly when we were growing up, would it have been possible for anyone to go into wrong things like stealing, kissing, sex etc. of course no because we’ll be conscious of his presence and we will not want to incur his wrath. Can we now see how foolish we are that we’re able to misbehave consistently right under the full glare of our heavenly father who is always ever present? This is because we don’t fear him because we don’t see him physically hence we take him for granted. Henceforth, let’s stop that, repent & begin to do things in the consciousness of HIS presence &we’ll find out it’ll be difficult to misbehave when we begin to adopt that kind of mentality. That is the original implication of one of the most abused words today i.e. BORN AGAIN. If you practicalize all these principles with the help of God on your side, you’ll not just become a practical example of who a Christian lady of dignity should be, you’d also be a lady that will be loved by God &greatly respected by men. Pass on the message to others.

Author: Lanre Kehinde.
(Lanre Kehinde is also the author of the book “5 important questions for singles”, he’s a conference speaker, and also very passionate about the singles ministry. Above all, he loves the Lord affectionately)

Read other articles on this blog:
He took off my underwear
I kissed Jezebel
My uncle had sex with me
Once upon a valentine
Cynthia must die but Mercy said No
Pornography: the way out!
18 games singles play
100 Answers for Singles

We also value your comments.

Will you like to get instant updates for new posts? … enter your email address on the sidebar to subscribe.