It is no longer new to know that thousands of girls are sexually abused and violated in the hand of men that are supposed to be their mentors and leaders! So many that are in the position of authority that these girls look up to whether in school, home, office, or in sanctuaries ended up becoming sexual predators, taking advantage of the gullibility of these women, sleeping with girls they are supposed to be watching over!  What a terrible world! 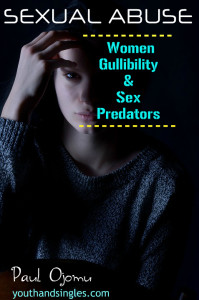 Have you ever wondered why most male celebrities have more female fans, even in the church, brothers who are singers, etc. have more ladies fans.

After publishing articles that speak to both ladies and guys, I realized I have more friends request from girls than guys!

So don’t be surprised if you see lots of church girls around their youth pastors or male youth leaders, girls heart are more open to their leaders, they want to be close, and be mentored.

Women love naturally! They tend to like men that appeal to their sense of humor and reasoning; so you have them getting close to those guys as much as possible. Do you also note that so many women were also close to Jesus when He was in Israel? Including his mother, sisters, and others, you saw the role they played during his last moments on earth! Jesus never took undue advantage of any of those women!

You may want to blame it on the girls, right? Why are they so gullible you are asking? The ladies are not blameless in some occasions but mind you, some of them do start with pure intentions, and some so much trusted their spiritual leaders that anything they do is right! They assume “Daddy” knows what he is doing! They become so gullible and vulnerable, while the so-called spiritual father or leader is busy exploiting them for their sexual satisfaction. But any godly-minded lady should be able to resist and run from such devilish leaders!

Permit me to say that I also know that some women don’t mind sleeping with their leaders or celebrities because they are morally slack themselves. But the truth is that if men will zip up and not try to complete the game already started by the lady either intentionally or unintentionally, fornication and adultery, especially among believers, will become a thing of the past.

What about their dressing? Are they not the one tempting the men by their careless dressings? If that is your thought, you have a point; women should not seduce weak men! But is that an excuse for the man to become a sex predator?  That a woman is naked on the street does not mean you should lose your brain; it’s like blaming store whose door was not well secured for burglary. Remember that even in Saudi Arabia where women cover the whole body, there are still reports of rape and sexual abuse (do a Google search to confirm for yourself). Don’t get me wrong; I’m not saying it is right for a woman to dress in a seductive way. In fact, if you don’t know, the Bible says; woe is anyone that tempts anyone to fall… but that does not mean the one that fell is guiltless or will be giving admittance to heaven because it wasn’t his fault!  Jesus, while addressing men on this issue said any man that look at a woman lustfully to sleep with her [it doesn’t matter how she dressed] is guilty of fornication (Mathew 5:28). If the woman’s appearance is the main reason, how come, housemaids, children, even some mentally challenged women are also being sexually abused and raped? So the issue lies beyond the eyes to what goes on in the heart! Guy, let your heart be right, align your heart with God, and you will be free from the shackles and chains of immorality!

Did you notice how Joseph ran out from Portiphar’s wife when the woman held his cloth and asked her to have sex with her by force? You don’t fight fornication! You simply run away from it! The Bible says resist the devil, and he will flee, but the same Bible says Flee Fornication! You can resist it; you have to flee. Fornication is simply stronger than the devil! BE WISE!

But seriously, why do we always blame the woman in any sexual encounter between a man and a woman? Even some male judges are biased against women when it comes to the issues of rape, always blaming it on the woman. Remember in the time of Jesus, two people were involved in adultery, but only the woman was brought to Jesus, no wonder none of them could stone the woman after Jesus replied them, let him that have no sin cast the first stone! There is a strong sexual stereotype about women, and until men begin to see women in the right perspectives, the issues of sexual abuse will continue!…. The man and the woman are both guilty when sexual immorality is involved, it doesn’t matter who tempts who! James said “But every man is tempted, when he is drawn away of his own lust, and enticed” (James 1:14).

I attended a program where one lady that stopped being a prostitute after she gave her life to Jesus said that “a commodity will not continue to sell if there are no buyers” meaning that the reason why prostitution and women sexual trafficking is thriving is that men are still buying it!

Hello sir, that you can provide solutions to her problems does not give you the right to her body! Having sex with a lady that needs your help or that is helpless or having marital issues is exploitation and wickedness! So, my brother, you have a responsibility to keep your “thing” zipped up. You are only permitted to have sex with your wife only! No sex before marriage, and no sex outside of marriage!

Guys listen! Don’t assume every girl that likes or come close to you wants sex! So don’t manipulate them into sleeping with you. Stop seeing women as SEX OBJECTS! Stop looking at them as something you can only relate with by sleeping with! Don’t take advantage of the gullibility of some girls to start having illicit affairs with them.  Some even go as far as deceiving and raping women; unfortunately, some of them can’t come out to report because of what the public will say or due to the fear of you or because of your threats if they ever say anything! Stop being a sex predator! Stop being wicked!

Stop Sexual abuse! Threat women as sisters, threat them with dignity and honour! See them from the right perspective! God gave Eve to Adam as a help meet for him! Adam was not superior, even though he was the head! A man is only the head of a woman only in marriage! (so as to allow for leadership responsibility, because every gathering must have someone to take charge). If you want to learn more on how to relate with ladies without defiling yourself, I strongly encourage you to read this article: Friendship with opposite sex.

If you are lady reading this, don’t fall cheap to any man, no matter ho he is even if he is your Pastor, Bishop, G.O, Prophet, Dad or Uncle, don’t allow him to deceive you, and don’t assume he know what he’s doing, if he starts lusting after you, know that he’s already losing his spiritual sense, so you have to run away! Don’t be gullible, Don’t be naive! Don’t say the man is tempting you or he’s the one that is trying to force you. A man and a woman are both equally guilty as far as sexual immorality is concerned, it doesn’t matter who tempts who!
On the other hand,please know that the worst thing you can do to “appreciate” your leader, a guy you love or like, a celebrity or your “spiritual father” is to sleep with him! You are not only killing the man; you are also burying his destiny, and the two of you will bear the consequences, except there are genuine confession and repentance!

Consider surrendering your life to Jesus today, if you are ready, then pray this prayer: “Lord Jesus, I have seen myself as a sinner, I am sorry for all the things I have done wrong in my life (take a few moment to ask His forgiveness for anything particular that is on your conscience). Please forgive me and cleanse me with your blood.
Thank you that you died on the cross for me so that I could be forgiven and set free. I confess and accept Jesus Christ as my personal Lord and Savior. Let all the works of darkness be destroyed in my life.
Thank you Lord for accepting me as your child and for writing my name in the book of life. Thank you Lord Jesus, Thank you heavenly father, in Jesus name I pray (amen)… click here to know more:  The best decision

You Can’t Fight DESIRE with DENIAL

The Dignity of VIRGINITY