Let him DO THE CHASE!

My peeps and I were having girl talk awhile ago and someone shared about a person she knew who was madly, head over heels, going bananas in love with this guy, but he wasn’t making a move…..ooh ohh. So what should girl friend do? Did I hear you say go after the guy? Ask him out? Well, that’s what she did! She made the first move. Told the guy she was feeling him and all that and they got it going on. He would come to her room, spend time with her, she would cook for him and shower him with care and attention. Then, dude calls her one day and asks for a break up and a week after that, he’s seeing another girl. Should I tell you what was learnt from the snoop? Boy didn’t really like the girl, sure he found her attractive 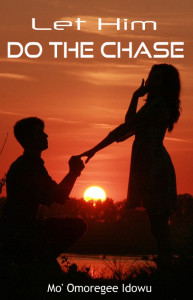 but he wasn’t really into her and that’s why he didn’t make a move but when “missy” couldn’t hold out any more, she ‘toasted’ him, [proposed to him] he was flattered and since he wasn’t hooked at that time, what could it hurt? So, he agreed, to buy time till he found the one he was looking for, and when he did, he bounced [gilted her]. That’s not all, the snoop also revealed from a reliable source that he said and I paraphrase, ‘I really do not appreciate a woman coming after me, if I want her, I want to do the chase’. This guy “fall my hand o”. Callous isn’t he?

Now, before we get all judgmental, I really wouldn’t blame the dude. I’m not saying he was right but I wouldn’t put it all on him, Missy should have listened to mama. Oh yeah. When mama said, go to school, read your books and become responsible and made, then boys would follow, mama knew what she was about. I’m not anti relationship in school, nah, that’s not what I mean; I’m up about the fact that it is a man’s GOD ordained position and calling to DO THE CHASE! You heard ladies! So, you think it’s cool to ask a guy out?

A man knows and wants what he wants! It is in a man’s nature to conquer. It gives him a helluva of satisfaction to run after something and get it; it’s like winning a lottery. He’s proud of himself and he cherishes his ‘loot’ like crazy, that’s why they don’t give up easily. Now, here you come wanting to suck the joy and accomplishment out of that. Even if a guy likes you and intends to ask you out and you go ahead to make the first move, sweetheart, he might act thrilled, tripped and all, but he ain’t really cool with it, trust me. If a guy really wants you, he would come after you. That he hasn’t right now even when all the signs that he loves you are there tells you he’s thinking ‘the investment’ over; he wants to be sure you would be the right move and a worthwhile chase and if he doesn’t come after you, he’s just not that into you honey, period.

I wish a lot of ladies would save themselves heartbreaks and heartaches by letting some certain things take the natural course, even the bible says ‘He that finds a wife…..’ That tells you, he does the finding; you just position yourself such that you would be found. Do what you gotta do to be found. A perfect example of this is Ruth in the bible. Now, we all have different analogies of this story, but I pondered on it and I realized that Ruth did not woo/chase Boaz, I don’t think she did. I think she merely positioned herself to be found. Now check, Mr Boaz was already checking Ruth out and doing things to make her know he could take care of her, but he didn’t make a move because he wasn’t in the right position to and wasn’t sure how it would be taken. Ruth wasn’t even thinking about Boaz in that way but smart and matchmaking mother Naomi saw prospects and awoke Ruth from her slumber and taught her how to POSITION herself. Naomi did not teach Ruth to ask Boaz out. So, when Ruth handled her business, Boaz did the right thing and married her honorably.

Ladies, all we gotta do is know how to handle our business. If that guy you are ‘dying’ for is not noticing you, perhaps it’s because you don’t have what he is looking for. Work on yourself, get a life! Get busy; add value to yourself and the people around you. Be filled with genuine love and spread it. Show him all the good qualities you got without being unnecessarily suggestive. Let this not be said at the end of it all, ‘I didn’t really want this, you forced the relationship’, yeah, I’ve heard that before. Let it be glaring, without reasonable doubt that he sought you out and asked for you, make him work for it baby, you’re too loaded to come across as cheap. Protect your respect and self esteem; save yourself from humiliation and heartbreak, like my friend’s friend should have done. Don’t give his friends something to laugh about. I’m not saying play hard to get, that’s not good, all I’m saying is, let him do the asking. If he wants you, he’ll come after you, shy or not. For real. If a guy is too shy to chase the woman of his dreams, then you probably should think twice about that guy sweetie, put that radar on big time, he’s probably like that with some other vital things. It’s ok to like a guy and position yourself to let him know you are available, but pleaseeeee, do not ask him out. Call me old fashioned or whatever, I’ve heard and seen enough to know that ‘the gospel according to ladies asking guys out’ just don’t pay! Ladies, just get busy doing your thing; sit pretty and let him work for it, let him DO THE CHASE!

(Also read How to attract the right guy!  by Paul Ojomu click here )

P.s – This is just my honest opinion and isn’t necessarily ‘the standard’ it is subject to any counter argument. So, please, let me learn from you.

By: Mo’ Omoregee Idowu
(Mo’ has touched so many youths and singles with her unique style of writing, she’s an author, a blogger, she’s simply a blessing to this generation) she also wrote keep moving, he’s taken! on this blog

Read other similar articles on this blog:
How to attract the right guy!
18 games singles play
100 Answers for Singles
He took off my underwear
I kissed Jezebel
My uncle had sex with me
Once upon a valentine
keep moving, he’s taken!
Cynthia must die but Mercy said No
Pornography: the way out!
hit like and share! Read other articles, visit our home page.
{read about the BEST DECISION you can ever take in life CLICK HERE }

Are you ready to surrender your life to JESUS?

If you are ready, say this simple prayer:
“Lord Jesus, I have seen myself as a sinner, I am sorry for all the things I have done wrong in my life (take a few moment to ask His forgiveness for anything particular that is on your conscience). Please forgive me and cleanse me with your blood.
Thank you that you died on the cross for me so that I could be forgiven and set free. I confess and accept Jesus Christ as my personal Lord and Savior. Let all the works of darkness be destroyed in my life.
Thank you Lord for accepting me as your child and for writing my name in the book of life. Thank you Lord Jesus, Thank you heavenly father, in Jesus name I pray (amen)

We will like to hear from you, drop your comments below or send your own experience, questions to paul@youthandsingles.com

Don’t forget to subscribe to this blog so we can keep you posted with latest articles,simply drop your name and email address on the subscription tab below

We value your comments.

I’m your friend,
Paul Ojomu (President, Youth & Singles International)
You can connect with me directly on Facebook  for a chat… https://www.facebook.com/ojomupaul

More Than a Dream